When making instruments, I prefer to make the scroll first. For me, when I finish the body of the cello, I want the scroll waiting for me, ready to install. Like getting to the third movement of a symphony and then having to wait for the composer to write the 4th movement before being able to play it. I don’t know, maybe that isn’t the best analogy but it was what came to mind. 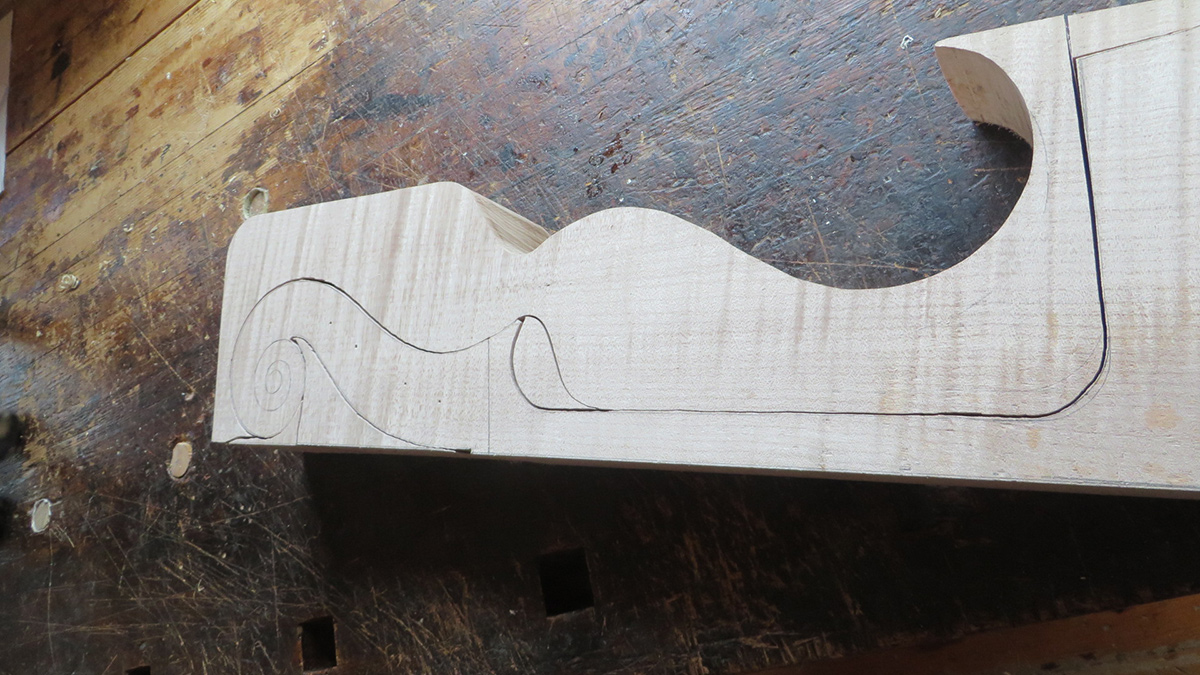 Sometimes the blocks of wood from which I cut my scrolls are such that they are wide and long enough to allow for two scroll out of the same pieces, nested together back to back. That was the case with this one in which this is the second scroll to be made from that block which explains it odd shape. You can see the cuts made to pull the scroll out of the solid block.

The first cut establishes the side view outline which after being sawn out, requires smoothing. When that is finished, the width of the neck, pegbox and head are drawn on, using a center line to keep it centered on the scroll. Then those pieces of waste wood are cut away.

These cuts remove the bulk from the scroll leaving the head ready for the hand sawing and carving work. 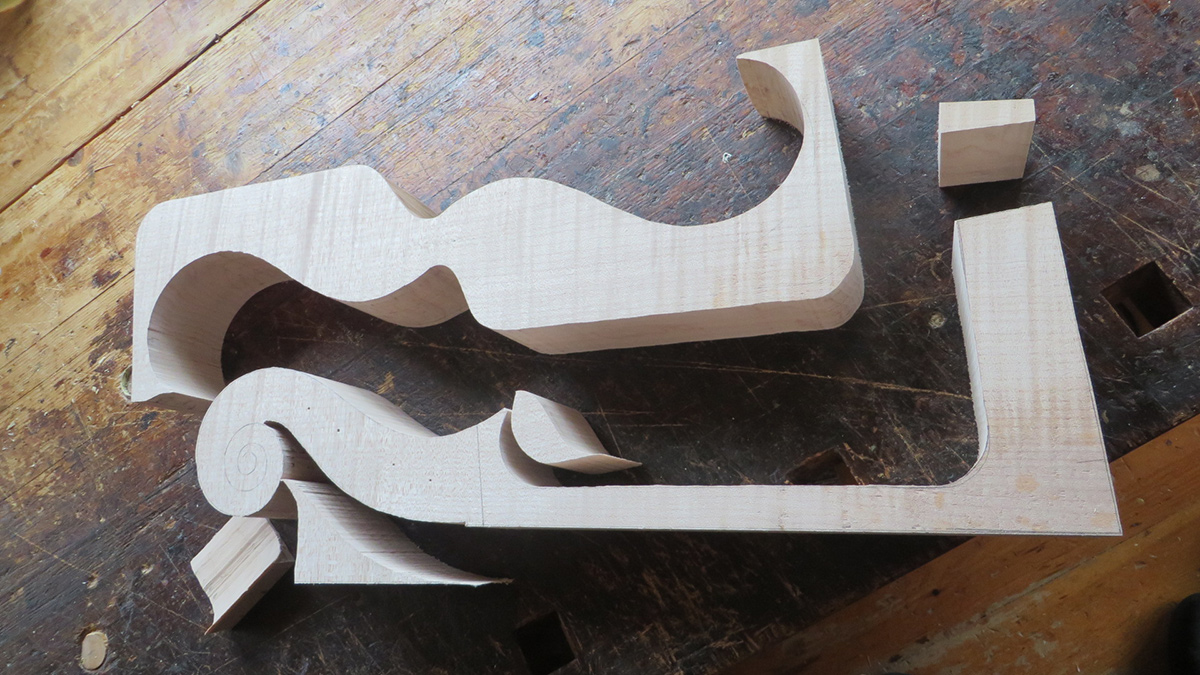 Taking off from the last message, the sides of the pegbox now get smoothed and shaped to create the outside profile of the pegbox. This includes the area above it as the pegbox begins to flow into the top of the scroll. 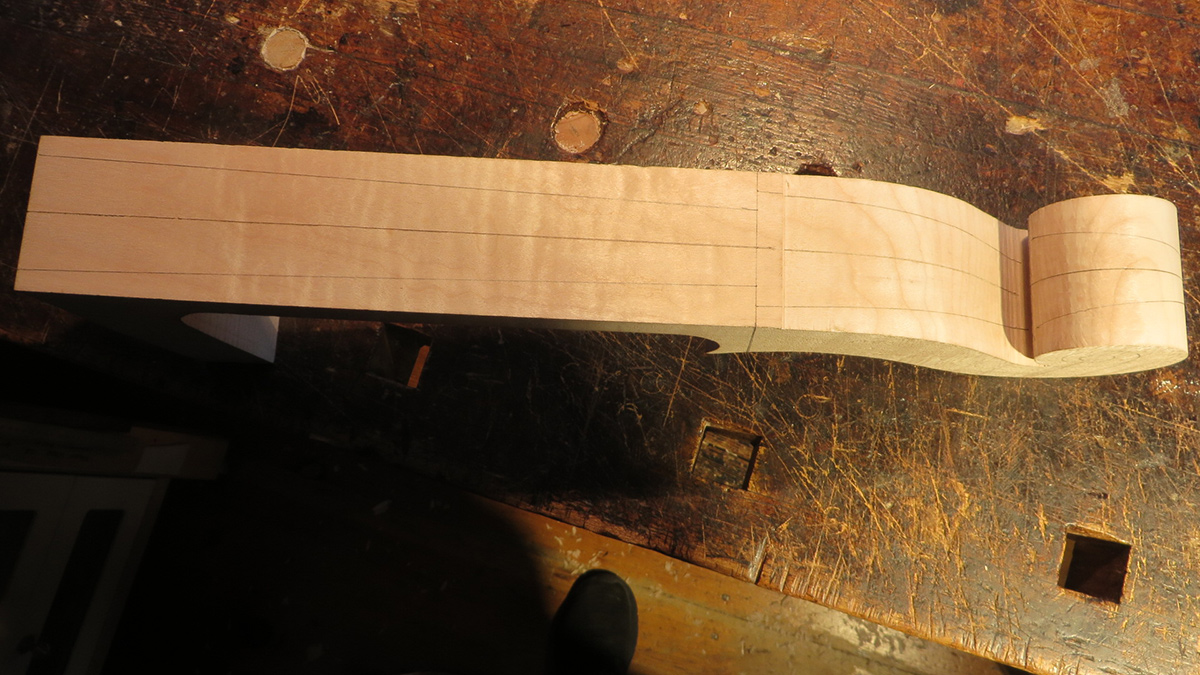 When I have finished shaping the outside of the pegbox and created the first turn of the scroll, this begins the process of shaping the head. Here I stop and “take a break for a word from our sponsor” in order to actually carve out the pegbox where the pegs will eventually receive the strings. 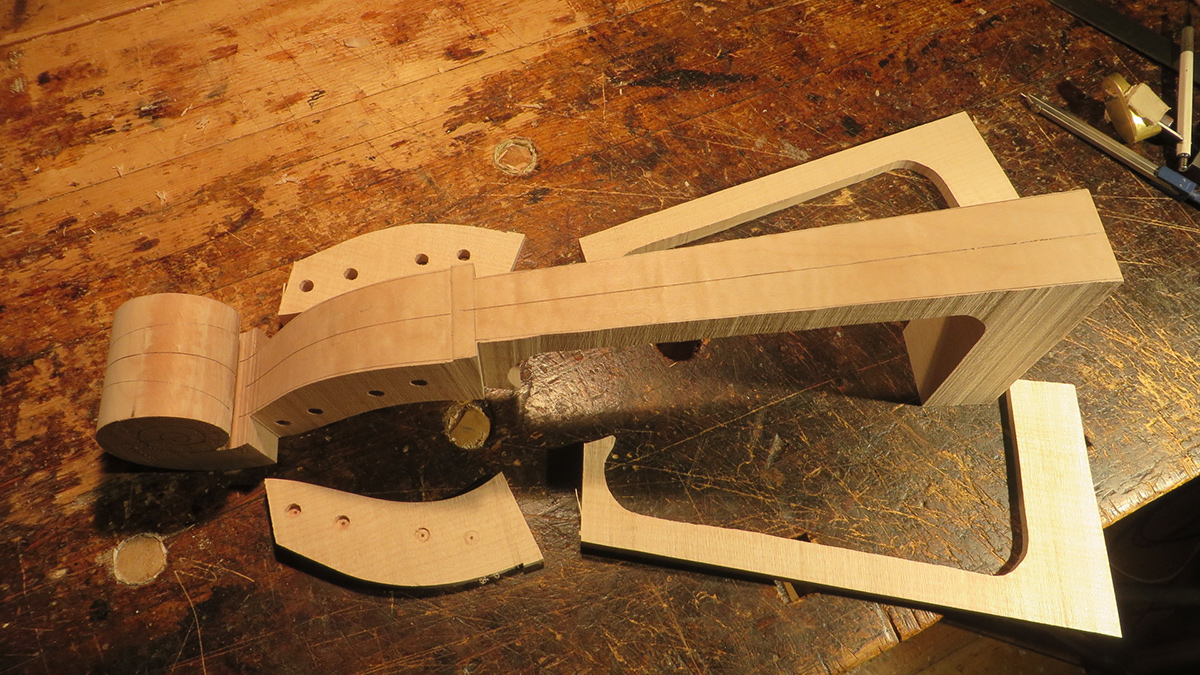 There is quite a bit of wood to remove from the interior of the pegbox so quite a number of years, I started using a graduated set of large Forstner drills to create a sort of framework of holes. Once drilled out, I begin the chiseling and removal of wood with chisels and gouges. It’s a little bit labor intensive but it’s actually also fun work to do. It’s a nice feeling to get another pegbox all carved out. 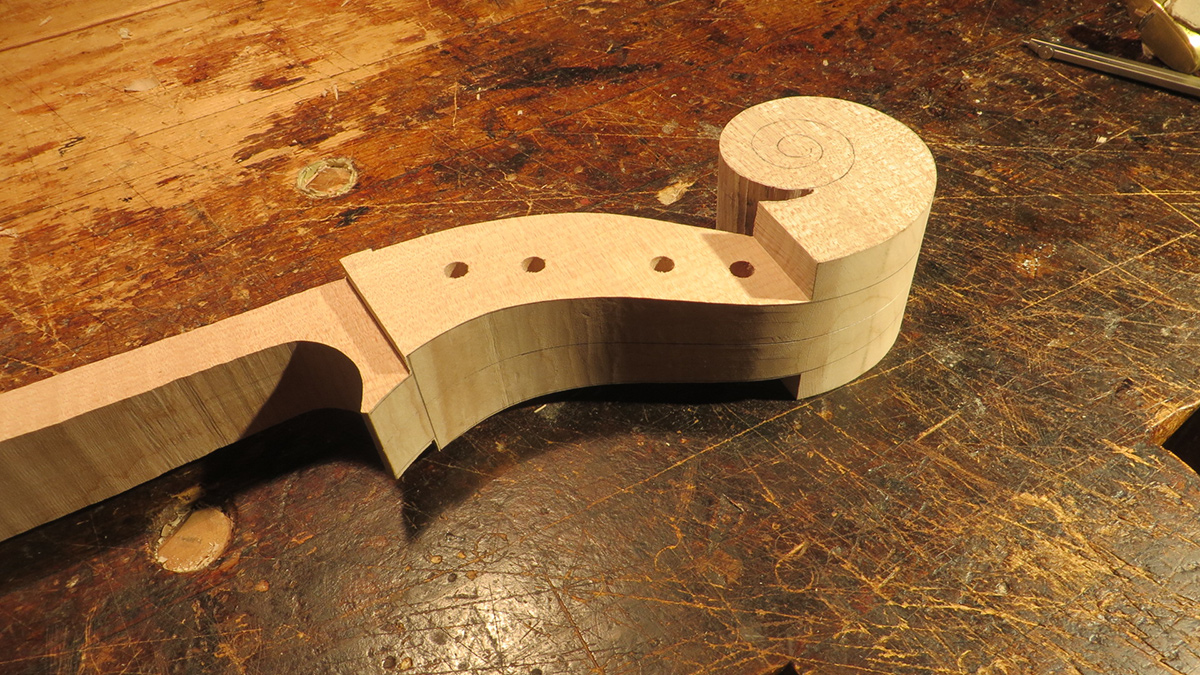 With the pegbox finished, the road is clear to carve the head of the scroll. As observed in Part 1, where a large chunk of wood is left at the head after cutting away the pegbox cheeks, the head is carved in manner that sort mimics the rise of a spiral ramp. Everything starts at the bottom and ultimately gets cut away leaving on each ear as the last part and “highest” part on each side. Pieces are carefully cut off to work the way up to the ear almost like cutting a stairs into a hill. 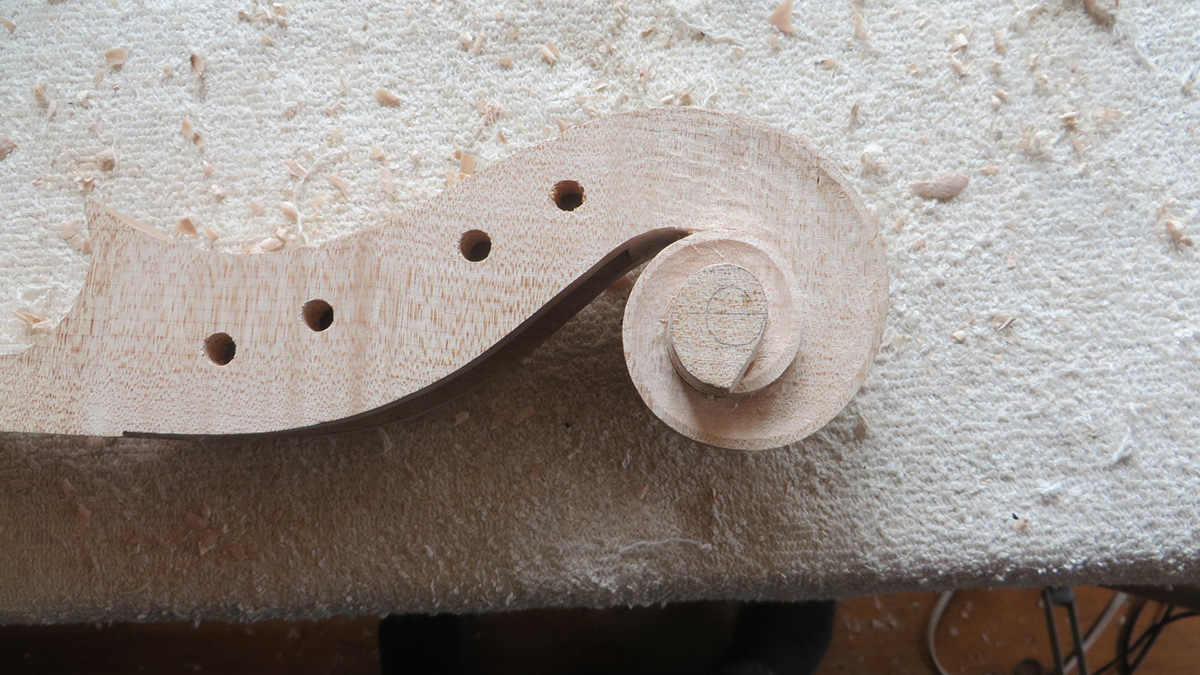 There is a lot of looking and carving to create both a good looking spiral on each side which has “flow”. Additionally, the straight on “face” of the scroll is constantly adjusted to maintaining the profiles desired to give it an elegant appearance. A small margin is left along the edge of the volute which will eventually accommodate the chamfer, which is the sort 45 degree angle created on all of the edges of the scroll. 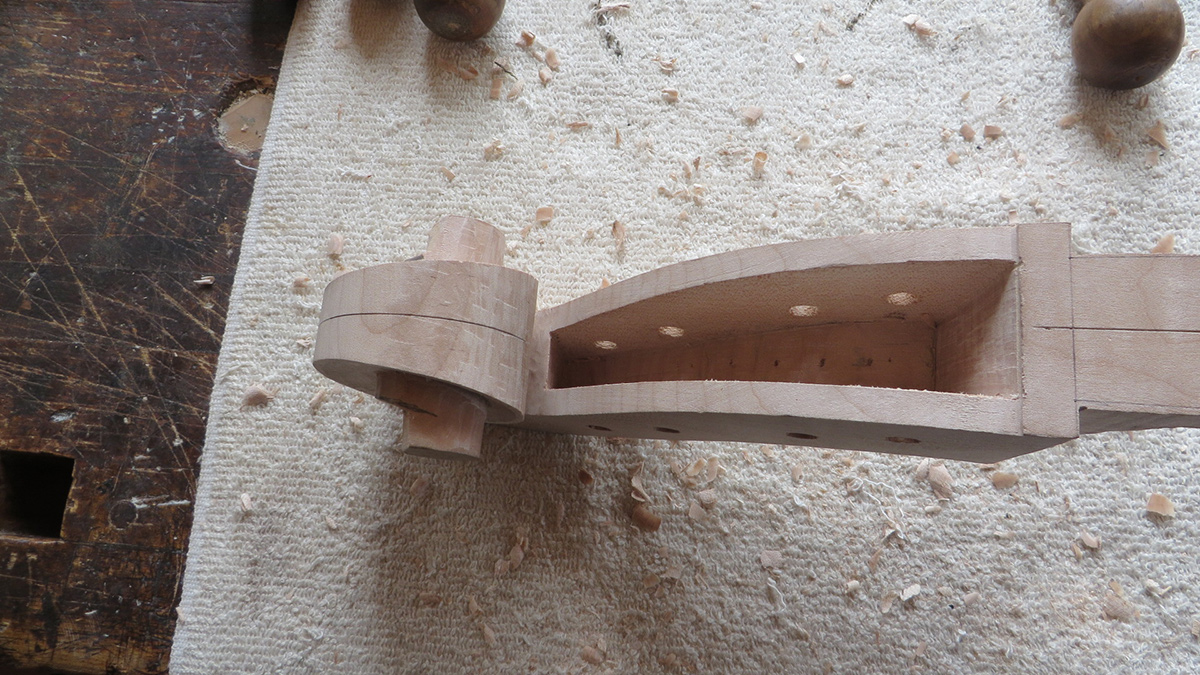 As the spiral continues to rise up to each ear, it gradually reaches its termination point at the ear, This is where the edge of the volute, spiraling around finally concludes. 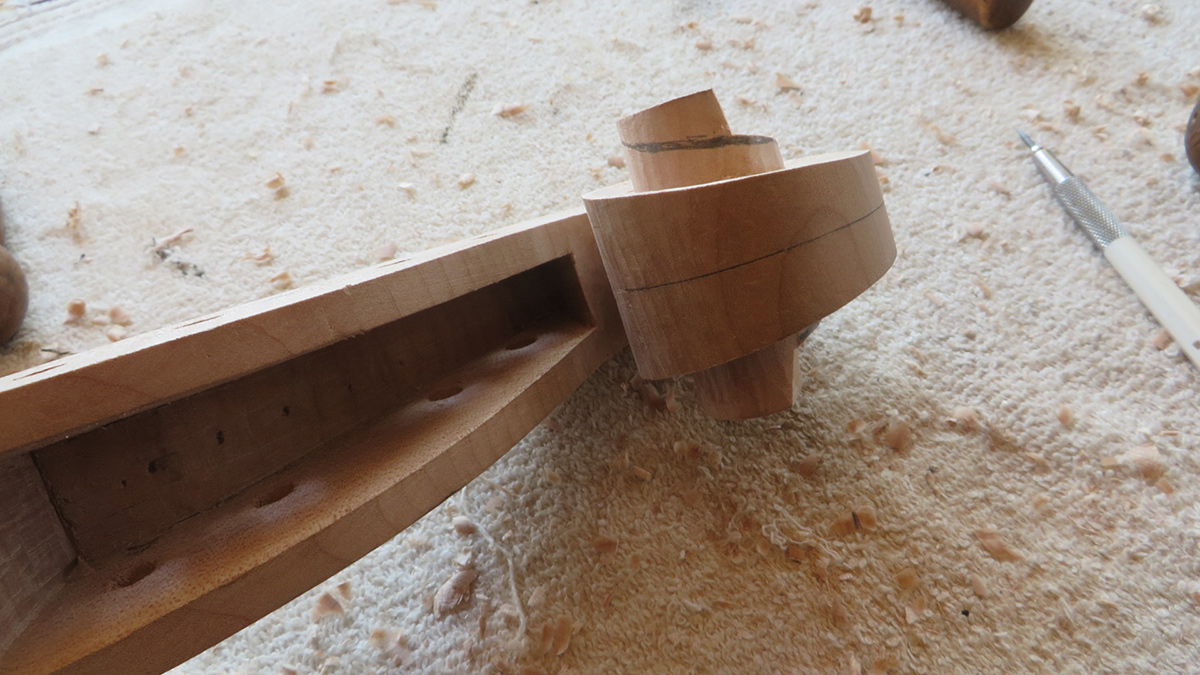 Next comes the chamfering and fluting on the scroll. When all the head carving has been accomplished, the tiny platform around the outside of the spiral is chamfered, which means putting the little 45 degree angle on all the edges. That starts making the scroll look a bit more finished. This chamfering puts the finishing touches on the outlines of the scroll both looking from the front, back and both sides. It requires very careful work and takes a bit of time. 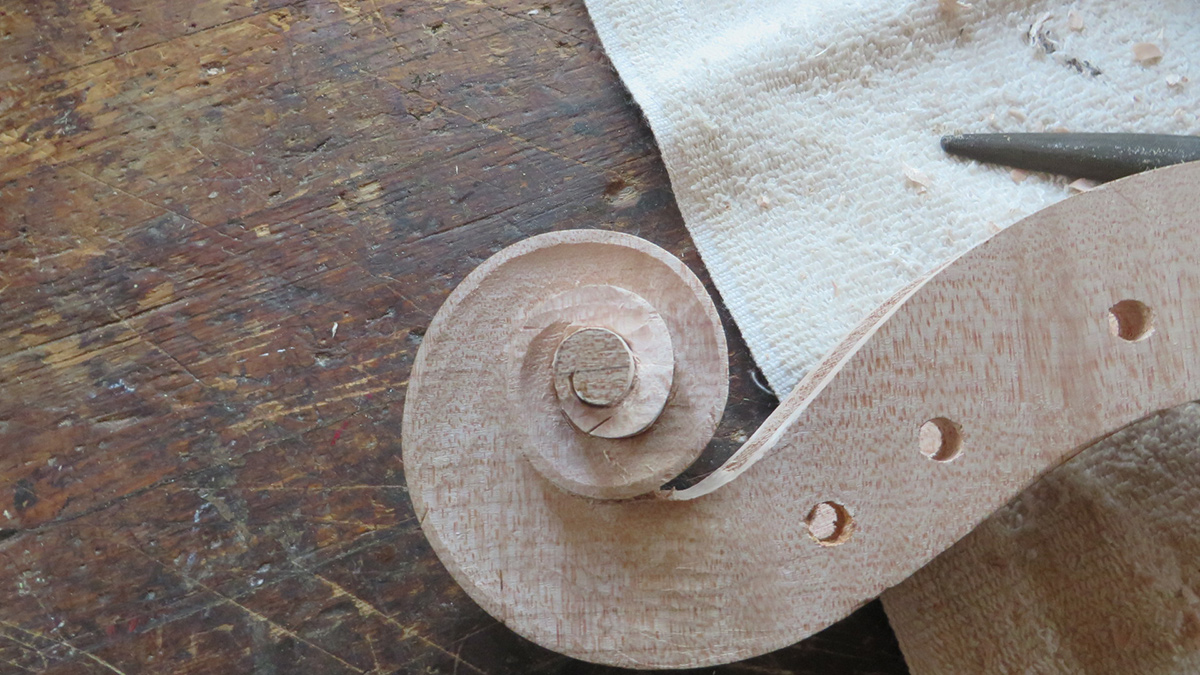 When the chamfering is completed, then the fluting is carved, which is the two grooves which go around the front and back of the pegbox and head, revealing the center line as standing proud of it. On cellos there is a sort of “duck tail” at the back bottom of the pegbox which starts out square and must be rounded, with the bottom side of it beginning the fully rounded cross section which flows into the neck handle. 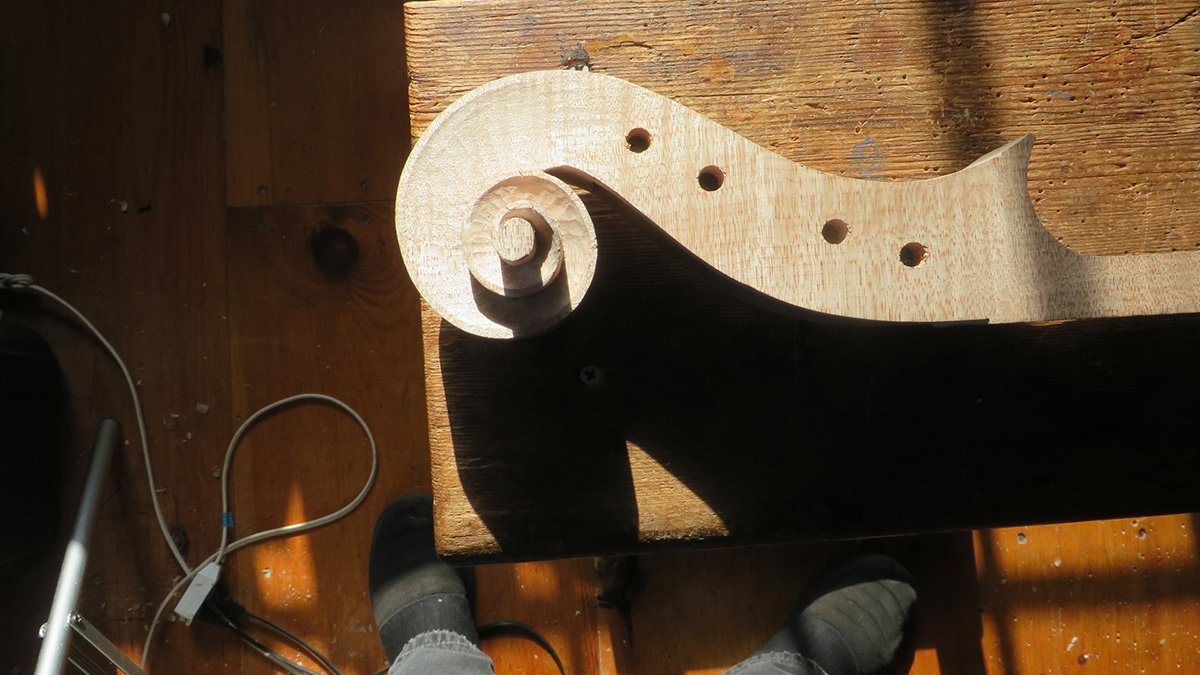 The fluting is carved to meet up with the chamfering, which creates the delicate edge outlining the three dimensional aspect of the scroll. Because of how the grain of the wood runs through a scroll, directions to accommodate that determine the direction that wood can carved, since it is not possible to carve against the grain. So many direction changes need to happen to end up with a fluid looking shape. 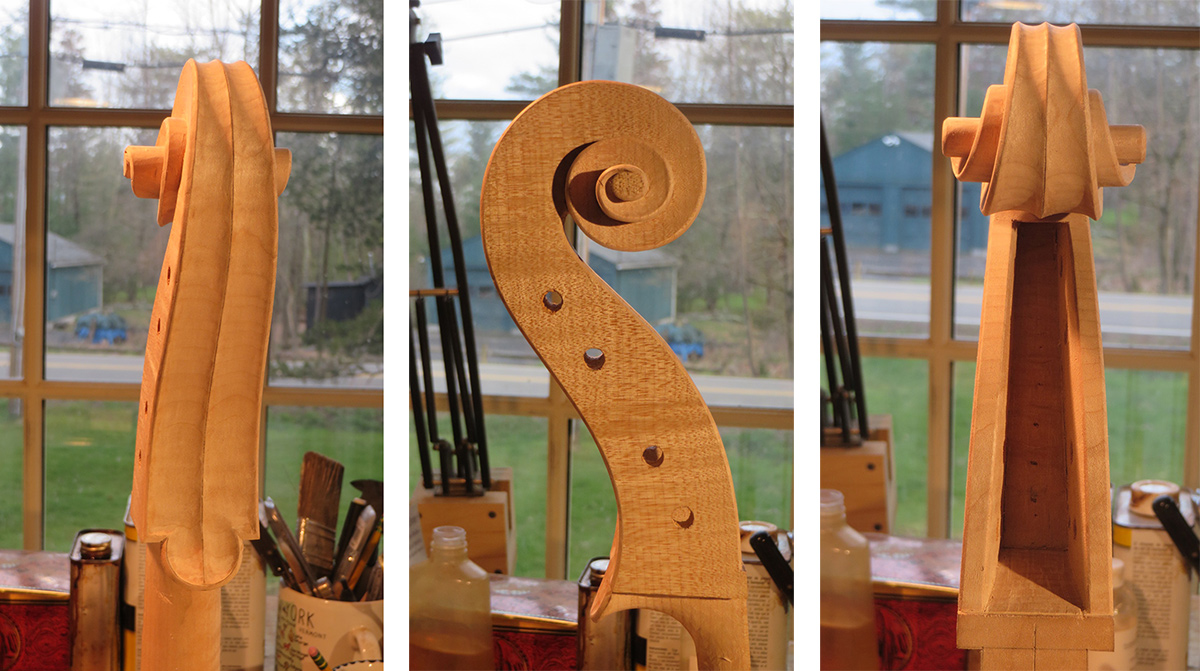 When the fluting has been finalized with the carving gouges, then the tool marks are mostly scraped with metal scrapers to smooth the surface. There is very little use of sandpaper. A few carving marks are allowed to remain, since hand carved scrolls are the distinction of a truly hand made instrument, much as they are subtly seen on great old Italian instruments.

That the gist of it. As of this evening, the scroll is finished. Next I start work on the body of the cello.